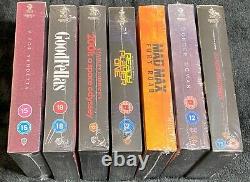 This product contains: 4K Ultra HD Steelbook, Exclusive Poster, Exclusive Enamel Pin. Before she was Wonder Woman, she was Diana, princess of the Amazons, trained to be an unconquerable warrior.

Raised on a sheltered island paradise, when an American pilot crashes on their shores and tells of a massive conflict raging in the outside world, Diana leaves her home, convinced she can stop the threat. Fighting alongside man in a war to end all wars, Diana will discover her full powersand her true destiny. MAD MAX - FURY ROAD. This set includes Mad Max: Fury Road on 4K UHD and Blu-ray, as well as the Black & Chrome Edition on Blu-ray in glorious black and white!

This set also includes Limited Edition collectable Steelbook and Mini Steelbook cases, and an Exclusive Enamel Pin. From filmmaker George Miller, originator of the post-apocalyptic genre and mastermind behind the legendary Mad Max trilogy, comes this return to the world of the Road Warrior, Max Rockatansky. Haunted by his turbulent past, Mad Max (Tom Hardy -- The Dark Knight Rises) believes the best way to survive is to wander alone. Nevertheless, he becomes swept up with a band of survivors fleeing across the Wasteland in a war rig driven by an elite Imperator, Furiosa (Oscar ® winner Charlize Theron-- Prometheus). They are escaping a Citadel tyrannized by the Immortan Joe (Hugh Keays-Byrne), from whom something irreplaceable has been taken.

But the people have found salvation in the OASIS, an expansive virtual reality universe created by the brilliant and eccentric James Halliday (Mark Rylance). When Halliday dies, he leaves his immense fortune to the first person to find a digital Easter egg he has hidden somewhere in the OASIS, sparking a contest that grips the entire world.

When an unlikely young hero named Wade Watts (Tye Sheridan) decides to join the contest, he is hurled into a breakneck, reality bending treasure hunt through a fantastical universe of mystery, discovery and danger. Journey alongside Steven Spilberg and the cast for over 90 minutes of bonus content loaded with Easter eggs'80's nostalgia and how they achieved the impossible. Stanley Kubricks dazzling, Academy Award®-winning achievement is a compelling drama of man vs. Machine, a stunning meld of music and motion. Kubrick who co-wrote the screenplay with Arthur C. Clarke first visits our prehistoric ape-ancestry past, then leaps millennia (via one of the most mind-blowing jump cuts ever) into colonised space, and ultimately whisks astronaut Bowman (Keir Dullea) into uncharted space, perhaps even into immortality.

Commentary by Keir Dullea and Gary Lockwood. Channel Four Documentary200 1: The Making of a Myth4 Insightful Featurettes:Standing on the Shoulders of Kubrick: The Legacy of 2001.

Directed and cowritten by Martin Scorsese, it was judged 1990s Best Picture by the New York, Los Angeles and National Societies of Film Critics and named to the American Film Institutes Top-100 American Films List. Electrifying performances abound, and from a standout cast that includes Robert De Niro, Ray Liotta, Lorraine Bracco and Paul Sorvino, Joe Pesci walked off with the Best Supporting Actor Academy Award®. It bristles with passion, wit and style and endures as an American classic (Peter Travers, Rolling Stone).

DOCUMENTARY INCLUDING INTERVIEW WITH THE DIRECTOR, CASTAND SOME OF YOUR ALL-TIME FAVOURITE MOVIE GANGSTERS! Join some of Martin Scorseses greatest gangsters Robert De Niro, Leonardo DiCaprio, Harvey Keitel, Ray Liotta, Jack Nicholson and Joe Pesci to discover what its like to act for perhaps the greatest gangster director of them all.

Paper Is Cheaper Than Film. Who is the man who hides his scarred face behind a mask?

Who is V and who will join him in his daring plot to destroy the totalitarian regime that dominates his nation? From the creators of The Matrix trilogy comes V for Vendetta, an arresting and uncompromising vision of the future based on the powerfully subversive graphic novel. V for Vendetta on 4K Ultra HD and Blu-ray. Two new pieces of EC on 4K disc (not in 4K Resolution). Exclusive Acrylic Pin housed in a SteelBook Mini Case.

Remember, Remember: Guy Fawkes and the Gunpowder Plot. England Prevails: V For Vendetta and the New Wave in Comics. Saturday Night Live Digital Short. ALL INCLUDE 4K DISC AND BLU-RAY DISC. MOST RARE & OUT OF STOCK. Good luck and thanks for viewing! The item "TITANS OF CULT 4K BLADE RUNNER WONDER WOMAN, MAD MAX, RPO, 2001 GOODFELLOWS V" is in sale since Saturday, November 21, 2020. This item is in the category "DVDs, Films & TV\DVDs & Blu-rays".

The seller is "deriside" and is located in Woking. This item can be shipped worldwide.