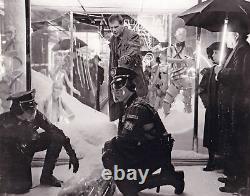 French "Still Photo" label on verso. Based on the 1968 novel, Do Androids Dream of Electric Sheep? Like Stanley Kubrick's "2001" in 1968, and building on the claustrophobic, dystopian vision director Ridley Scott had already developed in "Alien" (1979), "Blade Runner" set a standard for science fiction cinema that resulted an irrevocable influence on the genre.

The bar was raised not just with regard to visual style, but with the invocation of socio-political themes that had prior to that time only existed in science fiction literature. Very Good plus, light edgewear and creasing. Carson and Connolly, Destroy All Movies.

Royal Books is located in the midtown area of Baltimore, Maryland. Since 1996, we have specialized in rare books and paper relating to twentieth century literature, genre fiction, the arts, and popular culture, with a particular emphasis on cinema. All books noted as First Editions are also First Printings unless indicated otherwise.

This listing was created by Bibliopolis. This item is in the category "Everything Else\Every Other Thing".