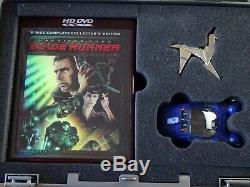 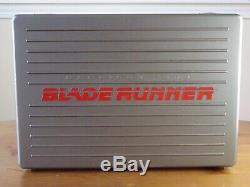 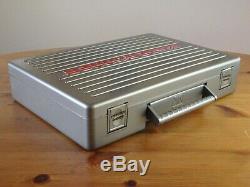 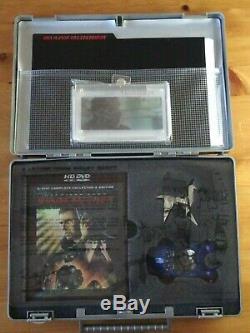 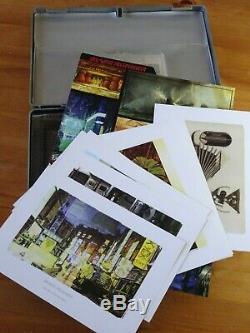 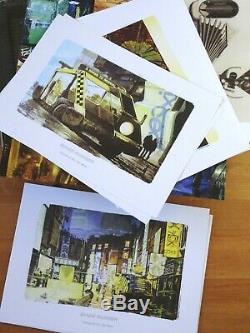 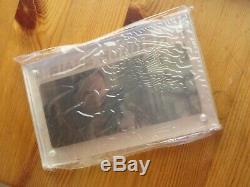 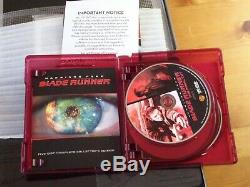 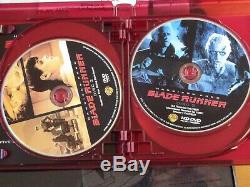 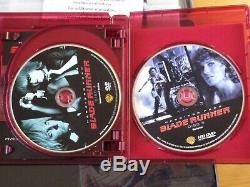 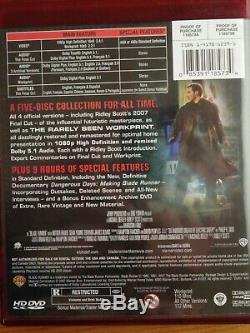 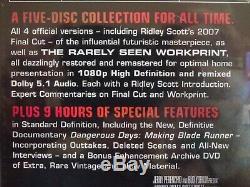 In a future of high-tech possibility soured by urban and social decay, Deckard hunts for fugitive, muderous replicants - and is drawn to a mystery woman whose secrets may undermine his soul. This spectacular 5-Disc Set includes all five version of the legendary Sci-Fi film from Director Ridley Scott - the definitive Final Cut with all new 5.1 audio, three additional versions of the film, and the rare Work Print version - in addition to the in-depth feature length documentary "Dangerous Days", and one complete disc of bonus content including over 80-minutes of never-before-seen deleted scenes. The Ultimate Collector's Edition is packaged in a limited edition, numbered "Deckard" briefcase and features rare and collectable memorabilia such as a Spinner car replica, Unicorn figurine, Illustration and Photo cards, and a lenticular Motion Film Clip in lucite. This is the ultimate collection that no fan should be without! In celebration of Blade Runner's 25th anniversary, director Ridley Scott has gone back into post production to create the long-awaited definitive new version.

Blade Runner: The Final Cut, spectacularly restored and remastered from original elements and scanned at 4K resolution, will contain never-before-seen added/extended scenes, added lines, new and improved special effects, director and filmmaker commentary, an all-new 5.1 Dolby® Digital audio track and more. Harrison Ford, Rutger Hauer, Edward James Olmos, Joanna Cassidy, Sean Young, and Daryl Hannah are among some 80 stars, filmmakers and others who participate in the extensive bonus features. Among the bonus material highlights is Dangerous Days, a brand new, three-and-a-half-hour documentary by award-winning DVD producer Charles de Lauzirika, with an extensive look into every aspect of the film: its literary genesis, its challenging production and its controversial legacy. The definitive documentary to accompany the definitive film version. The Ultimate Collector's Edition will be presented in a unique 5-disc digi-package with handle which is a stylish version of Rick Deckard's own briefcase.

In addition, each briefcase will be individually numbered and in limited supply. Included is a lenticular motion film clip from the original feature, miniature origami unicorn figurine, miniature replica spinner car, and collector's photographs, as well as a signed personal letter from Sir Ridley Scott. RIDLEY SCOTT'S ALL-NEW "FINAL CUT" VERSION OF THE FILM.

DOCUMENTARY DANGEROUS DAYS: MAKING BLADE RUNNER. A feature-length authoritative documentary revealing all the elements that shaped this hugely influential cinema landmark. Cast, crew, critics and colleagues give a behind-the-scenes, in-depth look at the film -- from its literary roots and inception through casting, production, visuals and special effects to its controversial legacy and place in Hollywood history. This is the version that introduced U. Movie-going audiences to a revolutionary film with a new and excitingly provocative vision of the near-future.

It contains Deckard/Harrison Ford's character narration and has Deckard and Rachel's (Sean Young) "happy ending" escape scene. Home video, laserdisc and cable releases up to 1992. This version is not rated, and contains some extended action scenes in contrast to the Theatrical Version.

The Director's Cut omits Deckard's voiceover narration and removes the "happy ending" finale. It adds the famously-controversial "unicorn" sequence, a vision that Deckard has which suggests that he, too, may be a replicant. BONUS DISC - "Enhancement Archive": 90 minutes of deleted footage and rare or never-before-seen items in featurettes and galleries that cover the film's amazing history, production teams, special effects, impact on society, promotional trailers, TV spots, and much more.

Featurette "--Nexus Generation: Fans & Filmmakers". This rare version of the film is considered by some to be the most radically different of all the Blade Runner cuts. It includes an altered opening scene, no Deckard narration until the final scenes, no "unicorn" sequence, no Deckard/Rachel "happy ending, " altered lines between Batty (Rutger Hauer) and his creator Tyrell (Joe Turkell), alternate music and much more. Sammon, author of Future Noir: The Making of Blade Runner. Featurette "All Our Variant Futures: From Workprint to Final Cut".