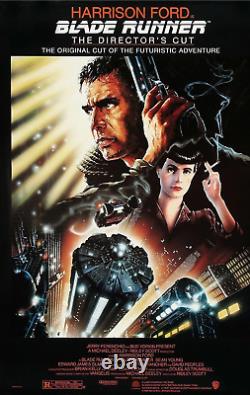 Is pleased to present for your consideration. Nice Low Fade Color Print. Running Time is 1hour 57 minutes. This is a Faded Color Print.

In the early twenty-first century, the Tyrell Corporation, during what was called the Nexus phase, developed robots, called "replicants", that were supposed to aid society, the replicants which looked and acted like humans. When the superhuman generation Nexus 6 replicants, used for dangerous off-Earth endeavors, began a mutiny on an off-Earth colony, replicants became illegal on Earth.

Police units, called "blade runners", have the job of destroying - or in their parlance "retiring" - any replicant that makes its way back to or created on Earth, with anyone convicted of aiding or assisting a replicant being sentenced to death. It's now November, 2019 in Los Angeles, California. Rick Deckard, a former blade runner, is called out of retirement when four known replicants, most combat models, have made their way back to Earth, with their leader being Roy Batty. One, Leon Kowalski, tried to infiltrate his way into the Tyrell Corporation as an employee, but has since been able to escape.

Beyond following Leon's trail in hopes of finding and retiring them all, Deckard believes part of what will help him is figuring out what the replicants wanted with the Tyrell Corporation in trying to infiltrate it. The answer may lie with Tyrell's fail-safe backup mechanism. Beyond tracking the four, Deckard faces a possible dilemma in encountering a fifth replicant: Rachael, who works as Tyrell's assistant. The issue is that Dr.

Elden Tyrell is experimenting with her, to provide her with fake memories so as to be able to better control her. With those memories, Rachael has no idea that she is not human.

The problem is not only Rachael's assistance to Deckard, but that he is beginning to develop feelings for her. Faded Color and Very Good Sound. It has a full title, and it is complete till the end. A few splices here and there.

Photos shown are for the purpose of display and are not from the film print offered. There are no rights of any kind conveyed with the sale of this collectible old film print. Don't miss this wonderful opportunity! If you need a good 16mm, 35mm, or 35/70mm Projector, Reels, Rewinds, Reel Bands, Splicers or Zoom Lens to show your films on then consider one of our offerings. ISCO and Telex Zoom lenses and much more.

There are no rights conveyed, given or implied in the sale. All rights of commercial and other use are strictly reserved. International and Export orders are welcomed anywhere in the world. ICE-MTE suppliers of quality Cinema Equipment since 1975.