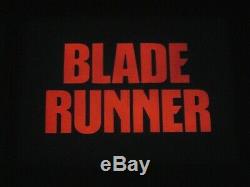 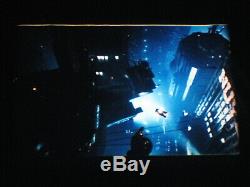 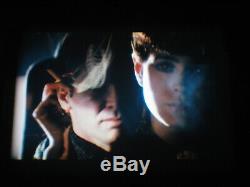 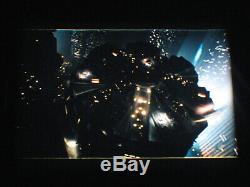 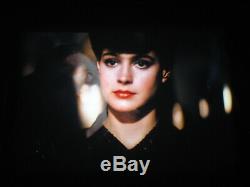 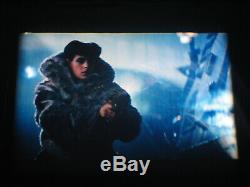 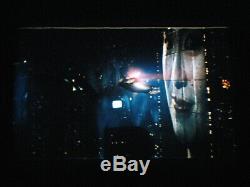 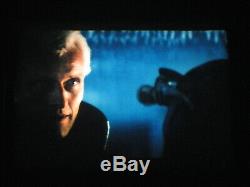 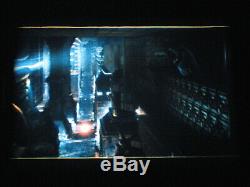 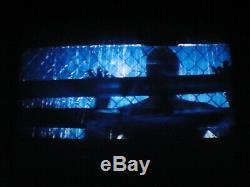 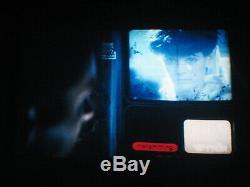 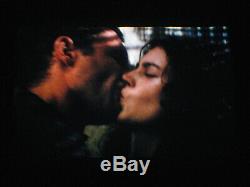 (This is NOT a feature length film). It highlights some of the stunning Visual Effects, action and early Vangelis Score. It also features the song, "If I Didn't Care" by The Ink Spots. The picture is FLAT with a 1:85 hard-matte to retain most of the original widescreen compositions created for the film including it's impressive Visual FX work by Douglas Trumbull & futuristic design by Syd Mead, including the police spinners.

All of the key characters are featured in this trailer including Deckard, Rachel, Roy Batty, Gaff, Pris, Zhora, Bryant, Tyrell and Leon. It's a film way ahead of it's time, represented beautifully in this trailer filled with memorable classic images and plenty of stunning optical dissolve transitions (hence the moody stylistic superimpositions as shown in a few photos). Don't miss this print, it's a great Sci-Fi Collectors item! This BLADE RUNNER Trailer is a very rare & hard to get film in this colorful LPP condition. Trivia Notes : The Voice-Over Narration for this Trailer was done by Morgan Paull imitating Harrison Ford.

Morgan played the interrogator of Leon, Dave Holden. Harrison Ford was already onto a new film project when this film was in post-production, so they used this sound alike in his place for most of the Motion Picture Marketing.

100', running for approximately 3 minutes and 40 seconds. A true find for a collector and rare in low wear, no scratches and rich color. Please look at the variety of other FILM items I have up for grabs and my feedback, to shop with confidence.

This print is in very good condition. (See photos) Check out the deep blues, whites and rich black colors in the titles & Visual Effects Shots (which are usually the first color to fade) and as you will see there is NO-fade to pink or yellow.

The print is very vibrant, as well as the orange, red & green colors. The posted PHOTOS were taken off a 6 foot wide image projected on a white sheet, so any wrinkles or action-blur (projected moving image taken at 400 ASA) you might see on the extreme sides are in the sheet and NOT lines in the film. Please forgive the photography & digital camera. The image is sharp & vibrant and as this is a LPP print , it will not fade. The head of the trailer begins with the MPAA Rated R green card & the Ladd Company Release Logo with the green tree, and there are 2 credit billing blocks after the title and the Harrison Ford art card. There are NO splices and no. As this was on a compilation reel of trailers, there is no countdown leader and it is supplied in a plain box. The magnetic sound is excellent throughout with no dropouts. Top notch recording level and full dynamic range; low end presence of bass & high end subtleties. One of the best magnetic tracks I've heard.

The color excellent with vibrant colors throughout. This print has been in my possession for 15 years & has been well cared for with proper film cleaner & lubricant.

It's tough to tell which Film Lab printed this based on it's color, sound & image, but it's one of the best optical reductions I've seen. Groundbreaking Sci-fi at it's best! If you have any specific questions about this or other listed Trailers, feel free to ask! The item "BLADE RUNNER Super 8mm Sound LPP Color VERY RARE Ridley Scott Film Movie Trailer" is in sale since Sunday, April 21, 2019. This item is in the category "DVDs & Movies\Film Stock".