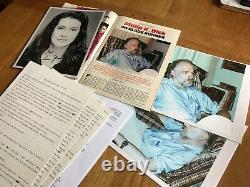 This collection consists of an original unpublished interview with Sean Young about her involvement with the production of Blade Runner. These are the original hand-typed transcripts with hand-corrections, on six sides of letter size white paper, stored and unseen since 1982.